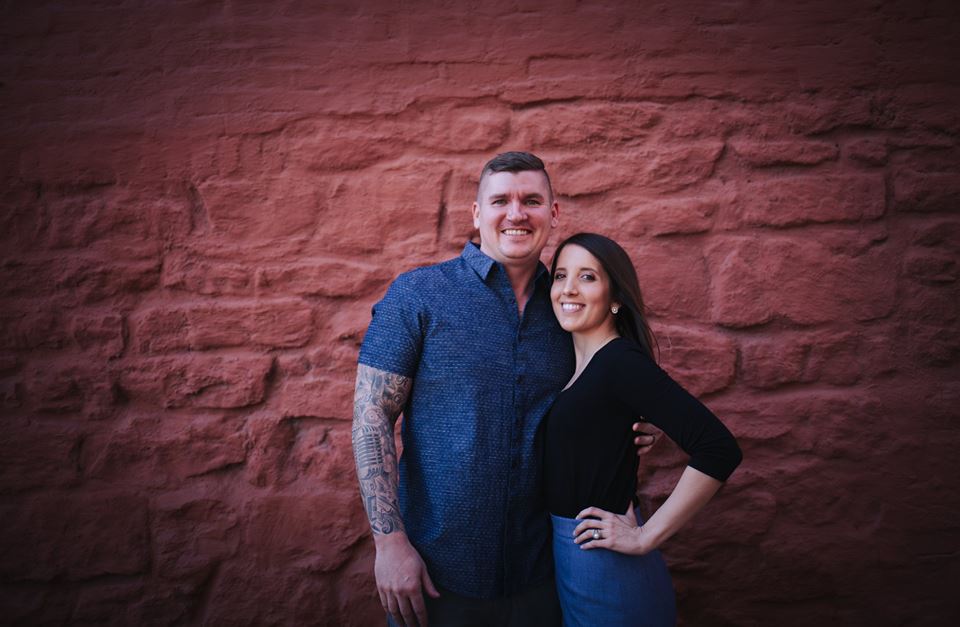 “We met at the Sandwich Shoppe. She worked at the courthouse and she would come to lunch two or three times a week and I would always ask my employees, ‘Who is this girl?’ Then we started talking and stuff. I’m 10 years older than her, but it works. I just knew when she walked in that I loved her. Food kind of brought us together. It seems that everything with us is food related.

Kasie actually proposed to me first. She made me dinner and she proposed to me. That’s why I love our marriage and our relationship because it doesn’t have to be the plain Jane stuff. I think it’s awesome that she proposed to me. Then a couple of weeks later I planned a trip to Weston with the idea of proposing to her, and planned a reservation at a restaurant that we’ve been to a few times there. It’s a funny story. We were staying at a bed and breakfast there and the restaurant called me on the day of the reservation and told me that a car had hit their power source and there was no power. This was in July so it was really hot. So they said that we could still go and sit out on the patio. And I’m like, ‘I need to keep this reservation. You don’t understand.’ So we still went. I went inside and told the chefs there to put the ring in the dessert and they’re like, ‘No wonder you didn’t want to cancel the reservation!’ It was just awesome.

We’re both busy and have high goals, her with law school and me with the restaurant, but we never forget about our marriage. A lot of people put their marriage on the back-burner. I’ve told her from day one that if this restaurant ever started tearing us apart, I’m out of here. I would rather have her in my life than this restaurant. I love her to death and I love the restaurant, but family is more important. I wouldn’t even be doing this if it wasn’t for her.”

“What’s one piece of advice that you would give the people reading this?”

“Never give up. If you really want to do something, just do it. Go out of your comfort zone a little bit. Try new things. Here I try to push the envelope further and further. Every month we change the menu to get people to get out of their comfort zone, to try new things because there’s so much good food out there. And that’s just like life. I don’t want to just be the guy that goes to work and does the same thing for 40 years.

I want to be a chef. I hate stress, but I also like it because it means that I care. I would tell people to never give up and do what they want to do in life, whether that’s being a chef, being a singer, being a lawyer, just go do it. Even if in a year this thing fails, it won’t upset me because at least I know that I tried doing it. But if I had never tried it, if I had just stayed at the Sandwich Shoppe in my little comfort zone, I would have never been happy with life. Life is so short as it is. You never know when you’re gone. I would just tell people to do what makes them happy. You just get one chance at life. There’s no practice run.”